While research into health benefits of cannabis has zipped along thanks in part to the local culture of ‘protekzia,’ a pioneer in the field says hundreds of uses of the plant are waiting to be discovered, and a marketer wants to slip it into milk so everyone can have a daily dose

As hundreds of medical professionals, farmers, patients and cannabis activists descend on Israel this week for the Cann10 International Medical Conference from September 11 to 13, Israeli scientists are plowing ahead with new clinical trials in order to approve cannabis use for a wider variety of diseases.

Israel is a well-known internationally as a pioneer in medical cannabis. This summer, the government approved a plan initiated by Health Minister Yaakov Litzman (United Torah Judaism) to relax some of the medical cannabis requirements. The plan will expand the number of doctors who can issue cannabis prescriptions, remove limits on the number of marijuana growers, make cannabis available at approved pharmacies, and possibly eliminate the requirement for a permit from the Health Ministry so that just a doctor’s prescription will be sufficient.

“There’s no reason why someone who needs cannabis for medical reasons should suffer and confront unnecessary red tape, and therefore the present situation must be changed,” Litzman said in June, the Haaretz daily reported.

The Health Ministry’s move to make medical marijuana even more accessible is part of the country’s tolerance and even support for marijuana, especially in a medical context. 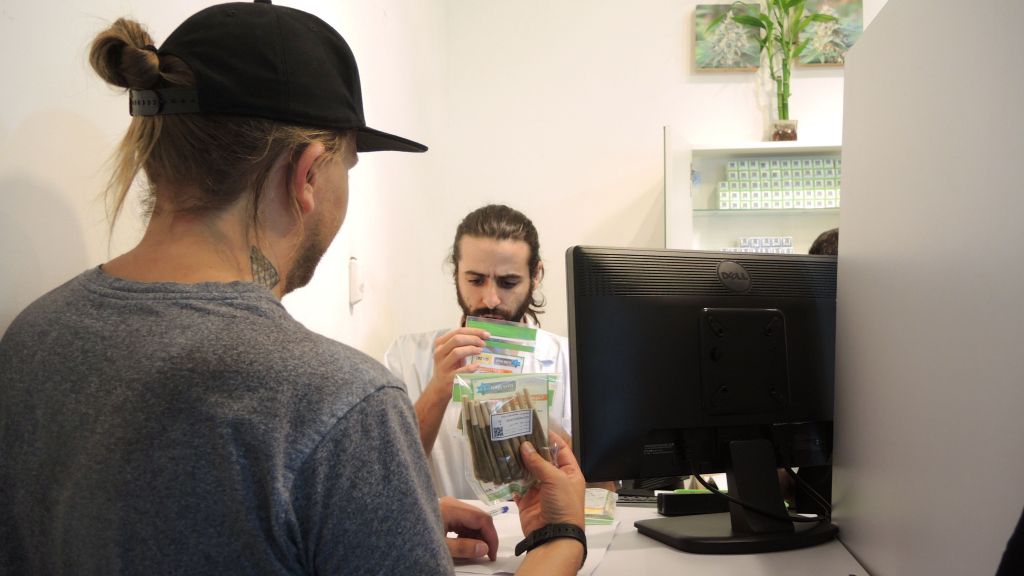 A Tikun Olam pharmacist metes out a patient’s monthly medical marijuana prescription at the Tel Aviv dispensary on September 1, 2016. (Melanie Lidman/Times of Israel)

“This is the second [marijuana] conference in Israel in six months and it is evidence that Israel and the world are starting to wake up to what Israel can contribute to the cannabis industry,” said Clifton Flack, chief marketing officer for iCAN Israel-Cannabis, a private equity fund that focuses on cannabis.

“Our key contribution has been and will be research,” Flack added. “The story of the Israel cannabis industry began with research, with Prof. [Raphael] Mechoulam. For the past 50 years we’ve contributed to research. You are going to find that, under the hood, a big percentage of the global cannabis products or industry will somewhere have something Israeli.”

Today, there are approximately 23,000 patients who have medical marijuana prescriptions in Israel, up from 10,000 in 2012. That number will continue to rise as marijuana is approved to treat more ailments, with scientists racing to run high-level, double-blind clinical trials exploring medical uses of cannabis that can be published in major medical journals.

Currently, cannabis is undergoing clinical trials or approved for use to treat tinnitus, colitis, Crohn’s disease, some of the spastic symptoms of cerebral palsy pediatric patients, severe epilepsy in children, Tourette’s syndrome, Parkinson’s disease, Inflammatory Bowel Disease, autism symptoms like insomnia or aggressiveness, and some of the side effects of cancer treatment. Future trials include testing cannabis for the treatment of rheumatoid arthritis, post-traumatic stress disorder and eye inflammations.

Professor Raphael Mechoulam, previously at the Weizmann Institute and now at Hebrew University, is largely credited as the father of medical cannabis for identifying and identifying tetrahydrocannabinol (commonly known as THC) in 1964. THC is the active compound in marijuana that produces the “high” sought after by recreational users. Another main active compound in marijuana is cannabidiol (CBD), which has medical benefits, including anti-inflammatory properties. 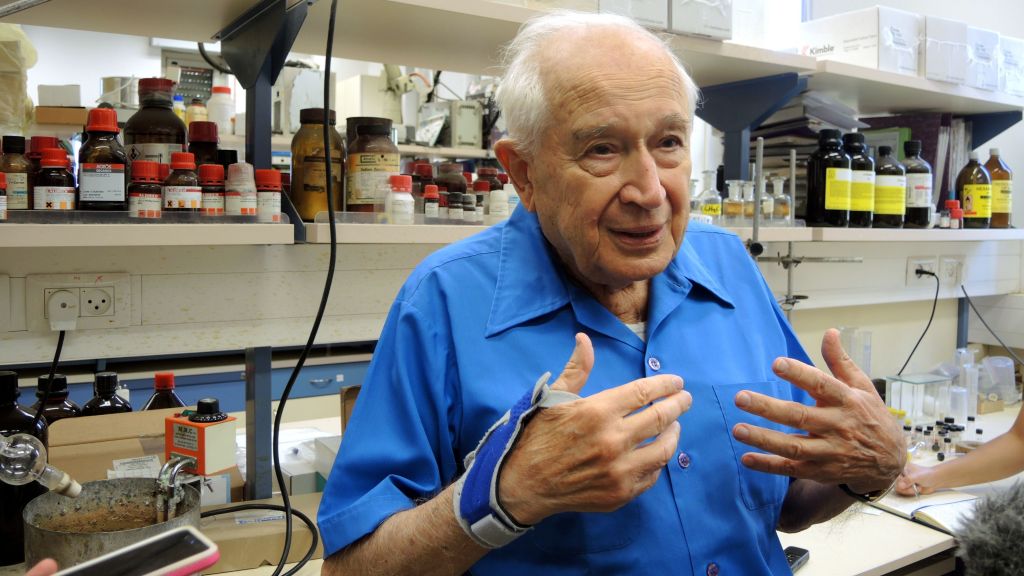 Professor Raphael Mechoulam in his lab at Hebrew University on September 1, 2016. (Melanie Lidman/Times of Israel)

It took years for the rest of the medical establishment to begin paying attention to his work with medical marijuana, Mechoulam said.

“There was a therapeutic importance for epilepsy that we identified, and although we published, no one was interested in epilepsy,” he said. “There are one- and two-year-olds with epilepsy and there is no other medication that works. Only in the last few years have they discovered our work. Up to 60 percent of the kids with epilepsy are helped.”

But the 85-year-old scientist, who still oversees a lab at Hebrew University’s Ein Kerem campus, feels that the cannabis field is on the precipice of a breakthrough, and hundreds of uses of the plant are just waiting to be discovered.

“In the last few years, compounds related to cannabinoids are acting on things that we didn’t expect, like osteoporosis,” he said. He noted that cannabis may also reduce the amount of brain damage after a head trauma by relaxing constricted blood vessels.

Mechoulam has watched the field of cannabis research come a long way in the past decades. When he first started his research at the Weizmann Institute in the 1960s, his first challenge was to obtain a large amount of cannabis. “The administrative head of Weizmann called someone he knew in the police and just asked for cannabis,” Mechoulam recalled.

“I heard from the other side [of the conversation], ‘Is he reliable?’ and the person from the Weizmann Institute said ‘Of course he’s reliable!’ so they said, ‘Have him come over.’ So I went to the police, I got five kilos of hashish, I signed for it, and I put the five kilos of hashish in my bag. Then I went on a bus and went to the lab. Now, in the bus there was a lot of cannabis smell; nobody knew what it was.” 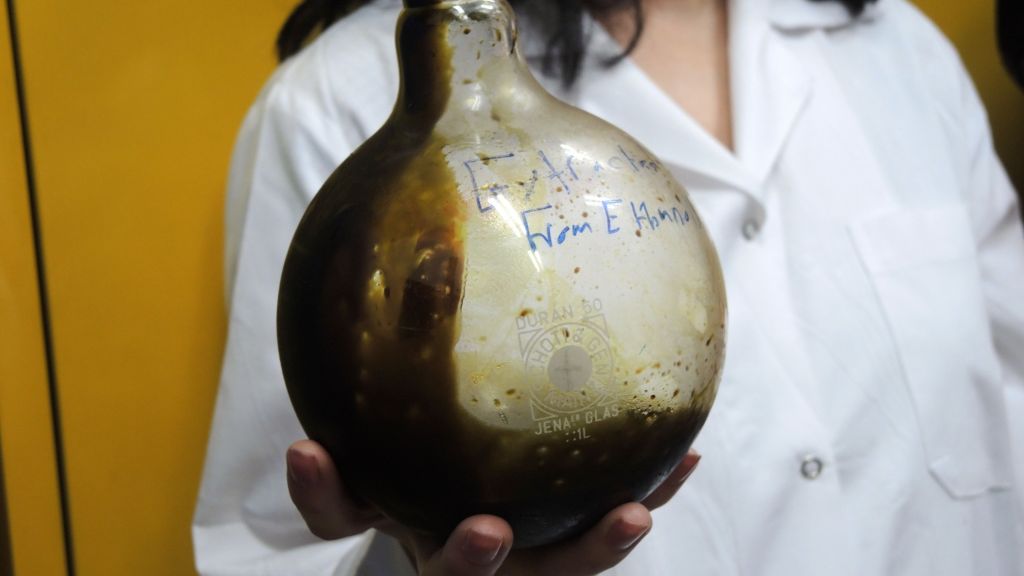 Christine Haj, a post-doctoral student in Mechoulam’s lab, holds a beaker of pure THC in the Hebrew University lab on September 1, 2016. THC, the principal psychoactive constituent of cannabis, can be an amber or gold-colored glassy solid when cold, and becomes viscous and sticky if warmed. (Melanie Lidman/Times of Israel)

The US National Institutes of Health has supported Mechoulam’s cannabis research for decades, since American scientists had much more difficulty obtaining cannabis for study. He was awarded a NIDA (National Institute of Drug Abuse) Discovery Award in 2011. Mechoulam said that while the US and Israel had similar laws governing cannabis research, Israel’s culture of personal connections, colloquially called protekzia, enabled the research to progress much faster here.

Still, there have been many challenges along the way, especially because cannabis is a natural compound that must be grown rather than produced.

“Clinicians don’t like to work with marijuana or hashish because it’s not consistent, and that’s not the way modern research is done,” said Mechoulam.

The smallest changes in growing techniques, weather, or watering can affect the chemical make-up of the plant. “THC amounts can vary even within the same plant,” said Dr. Keren-Or Amar, business development manager at Shizim, another cannabis investment company.

“One of the concerns the FDA [US Food and Drug Administration] has expressed is that when you use a plant you cannot secure the right dosage in every batch,” said Doron Ben Ami, chief strategy officer of Therapix Biosciences Ltd., a company that is developing cannabis-based drugs to treat neurological disorders such as Tourette’s syndrome and mild cognitive impairments.

“In pharmaceuticals, you need to be sure you know exactly what your patient is getting,” he said. 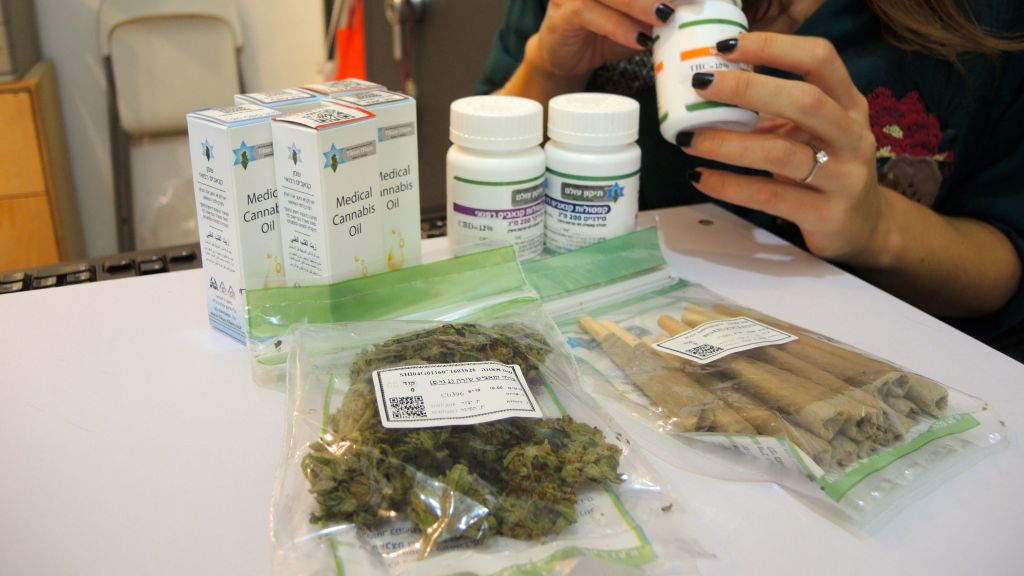 Medical marijuana at the Tikun Olam dispensary in Tel Aviv on September 1, 2016. Along with guidance from Tikun Olam’s specially trained nursing staff, patients can decide to purchase their prescription in flower form, pre-rolled joints, pills, or tinctures. (Melanie Lidman/Times of Israel)

Therapix and other pharmaceutical companies are working with the chemical production of THC, or synthetic THC. This allows the company to monitor the exact ratio of the active compounds that will be in the developed drugs.

But as additional strides have been made in producing synthetic cannabis, scientists are also getting better at manipulating strains of marijuana to have higher levels of THC or CBD depending on what disease they are treating.

Tikun Olam, the largest and oldest cannabis dispensary in Israel, now has 15 marijuana plant strains, which are cultivated to have a specific ratio of THC to CBD. Its Avidekel strain has 18% CBD compared to just 0.8% THC, meaning that it is safe for children and won’t produce the high commonly associated with marijuana. Tikun Olam treats more than 200 children with epilepsy with this strain.

Tikun Olam started 10 years ago with 10 patients in Israel, growing a few plants on Birya, a small moshav near Safed. When its list of patients grew to 1,000, it had to move to commercial fields whose location is closely guarded.

Next up: More markets, more diseases

Today, there are currently about 23,000 patients in Israel who have medical marijuana licenses granted by the Health Ministry. Tikun Olam treats 7,000 people per month. Except for patients with Tourette’s syndrome, patients must prove they have tried at least four alternative methods for managing their pain or illness before receiving a medical marijuana license, which is utilized as a last resort.

“The problem for us is that people want to believe that cannabis is going to cure them, but we don’t have the research yet,” said Professor Zvi Bentwich, a professor of medical biology at Ben Gurion University and the chief scientist at Tikun Olam. Bentwich was a pioneer in the Israeli fight against HIV/AIDs, and he became interested in medical cannabis after observing the positive effects that marijuana use, though illegal, had on his patients in dealing with nausea and loss of weight.

“In the 1990s, I advocated for my patients to use cannabis illegally, and then I helped get the government to legalize cannabis,” he said. “Previously, marijuana has not been studied clinically. Well-created, legal, clinical studies didn’t exist.” 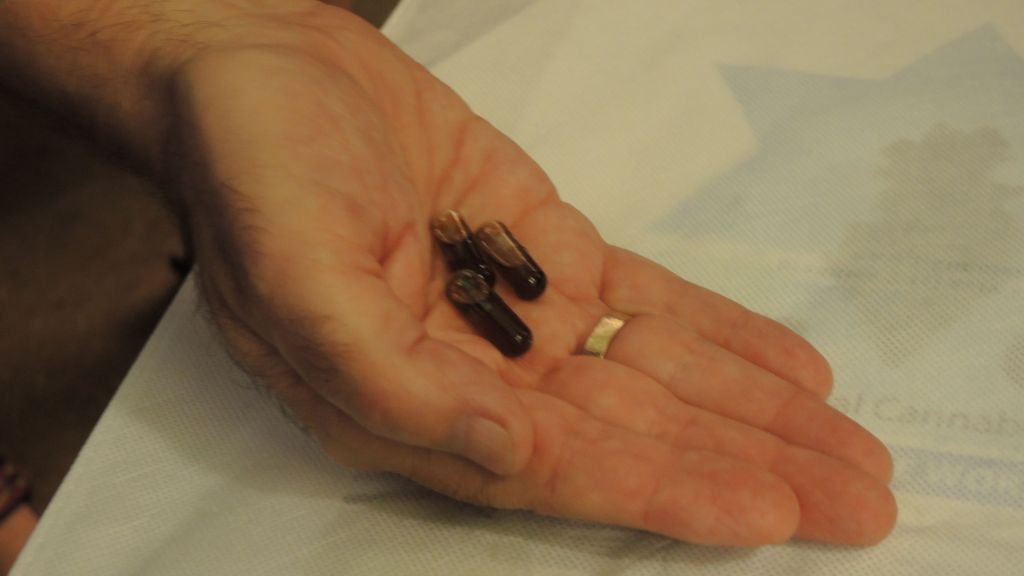 A cancer patient shows his concentrated marijuana pills in the Tikun Olam guidance center in Tel Aviv on September 1, 2016. (Melanie Lidman/Times of Israel)

Now Bentwich works with Tikun Olam to design clinical studies for various diseases. “We doctors are reluctant to use cannabis unless evidence is brought forward to prove it. In Israel, we are in a position to do pioneering work that has not been done anywhere.”

“The industry is exploding, but it is a fraction of what it is going to be in 10 years,” added Flack, the equity fund chief marketing officer. “In 10 years you are going to see cannabis everywhere. In Israel we add vitamin D to milk. We should be adding CBD. It doesn’t get you high. The body requires CBD, the brain produces it naturally and taking CBD every day in small amounts only does you good. I think within 10 years we will see Yotvata milk with CBD.”

Market potential could be huge. Cannabics Pharmaceuticals, an Israeli company that developed a marijuana capsule for cancer sufferers, estimates that the medical marijuana market has the potential to reach $3.6 billion in the US alone by 2019. This would make it larger than the organic food market.

“I think in 10 years every single accelerator or incubator in Israel will have at least one business, one startup doing something for cannabis,” said Flack. “It could be a medical device, or a tracking system, but in the startup world it will be everywhere. You are going to see a significant export industry, not of the flower, but of medical products.”

Exporting the buds may not be far behind. Agriculture Minister Uri Ariel announced in August that Israel would begin exporting medical marijuana, possibly within the next two years.

Scientists stress that the real key toward making marijuana more useful to patients is clinical tests that can systematically prove that cannabis is safe and effective for human use for specific diseases.

“I can cure a lot of diseases in mice [with cannabis],” said Amar, a former scientist now with the cannabis investment group. But without clinical trials, she said, “there’s no benefit to humans.”

This article originally appeared at https://www.timesofisrael.com/in-israel-booming-medical-marijuana-looks-to-conquer-new-highs/